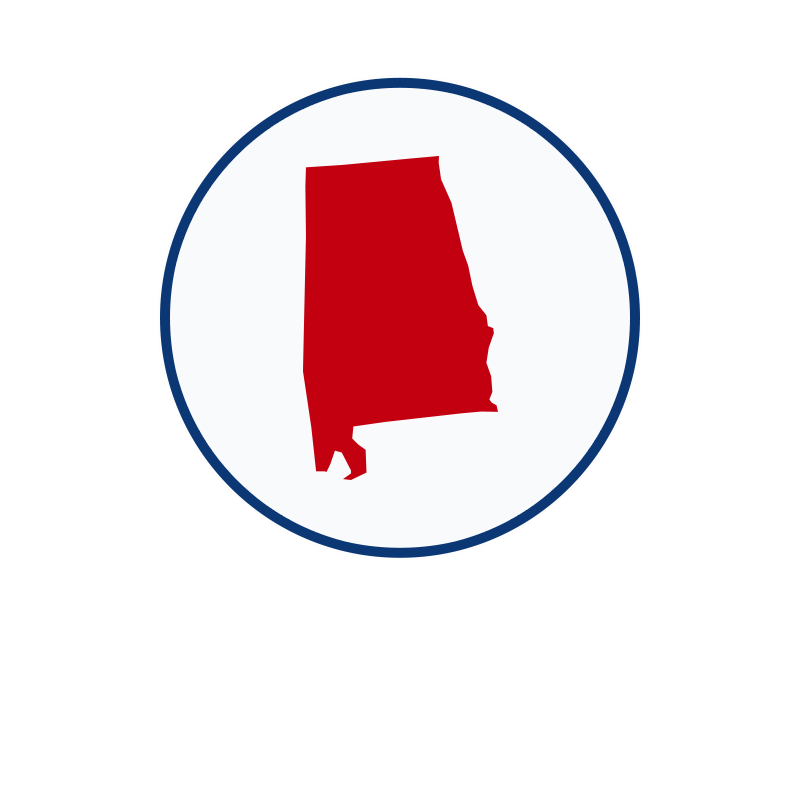 A deeply conservative state when it comes to games of chance, Alabama supports a sprinkling of casinos, licensed gaming ships, and legal dog and horse racing activities, first legalized in 1971, but the nature of the growth of online gaming opportunities poses unique legal questions that the state's century old constitution is ill equipped to address. The good news regarding the growth of online poker play is that the state simply does not target the practice, but the bad news is that that status is subject to change in a state that eyes games of chance with a suspicious eye.

The wording of Alabama's constitution regarding the definition of "contests of chance" is remarkably similar to those found in the legal statutes of other states. It is written to include those games where an element of skills enters into the prospect for winning. Specifically, state legislators define "Contest of Chance" as any game, gaming device, contest, or gaming scheme in which the outcome is dependent on an element of chance, notwithstanding the skill a player might bring to the game as a defining feature.

To apply these legalities to the game of poker, a gaming outcome that does derive to a "material degree" upon an element of chance, insofar as the outcomes of bets are concerned. Obviously, in poker, the element of chance is readily evident with the fall with each card, although the element of skill is certainly not absent. Under these legal guidelines, it is apparent that poker falls under these provisos, and the laws, which have been carefully worded to remove all doubt as to whether poker wagering is consistent with the spirit and wording of the Alabama law.

With a working definition of gambling from the Alabama constitution, it now becomes important to look at the law itself, which outlines criminal offences related to the practice, but for poker players in Alabama, the only legal concern relates to what is termed, "simple gambling." In short, one who might run afoul of this C-class misdemeanor includes:

Based on the above particulars, it is clearly evident that the strictures against playing poker only apply when played in a public setting, but games of chance played in the privacy of one's home is acceptable under the wording of the law. While "social gaming" is clearly defined in the legal codes of other states, it appears to be purposely vague as applied to the game of poker in Alabama. As an example, card games taking place in a non-private venue would be against the law, but games in the comfort of your own home or in a private club setting would pass muster under the wording of the law.

For the purposes of online poker games therefore, a strong argument can be made for the fact that online gambling, from the comfort of your own home would be seen as a form of social gambling, so therefore it can be assumed that online poker play will not violate the laws of the State of Alabama.

What Are Alabama's Online Poker Laws?

Owing to the strictures against public gaming, Alabama does not host any live poker rooms within her borders, so players must rely on playing social games in private settings and on the internet to get their poker fix. Additionally, card rooms in nearby neighboring states like Mississippi and Florida afford Alabamians with the chance to sit down across the table for a live game should that be their wont. That being said however, the state does allow the operation of three Native American casinos, but none of them offer poker or other table games for their patrons.

In terms of gambling, Alabama is a very conservative jurisdiction, so the likelihood that there will be poker rooms opening up across the state is unlikely. Indeed, opposition is so fierce that state officials in Montgomery have warred with electronic bingo halls in an effort to shut them down leading attorneys to the state Supreme Court on two separate occasions.

Enter online poker opportunities. By its very nature, the internet operates outside the purview of Alabama criminal codes, so residents can readily access those online poker sites that are legally available to every other resident of the United States. Regardless of the nebulous wording in Alabama's criminal code regarding online poker's legality, the nature of the internet makes enforcement at the local level near impossible. Getting a warrant to raid a private home on the suspicion that the occupants might be engaged in online poker play is extremely problematic, and that is why you never see local SWAT teams busting down doors.

Is it Legal to Play Poker in Alabama?

At more than 310,000 words, Alabama's 1901 Constitution is the longest constitutional document in operation anywhere in the world. While one would think that such a density of terms would lead to a detailed explanation regarding every facet of Alabama constitutional law, Alabama's coverage regarding the definition of gambling within the state is broad in its definition and coverage of all games of chance.

Under the Alabama constitution, a gambler is defined as a person who risks something of value based on the outcome of a game of chance that is in no way under their control or influence, which is based on an agreement that that person, or someone else, will receive something of value dependant on a particular outcome.

Excluded from these provisions are business transactions that fall under the purview of bona fide commercial transaction that find their validity under contract law. For example, security futures, indemnity contracts, or health and accident insurance would not fall under the guidelines of this measure.

The age of the state constitution, at 116 years, makes absolutely no mention of the internet, and the already sheer size of the document, perhaps the Alabama legislature are loathe adding to the constitution through the amendment process, so the state defers to those counties and municipalities that have made an accommodation to certain types of wagering. In short, they will not interfere unless a complaint is made against a betting operation.

While a diligent prosecutor might put together a case against you for using a mobile device to facilitate online betting, the risk of it happening in Alabama are decidedly low. According to vice detectives of Alabama's largest city, Birmingham, "We have not made any arrests for betting. Nobody's complaining about it."

Rarely does a legislative session in Montgomery open without at least an effort to address the ambiguous language in the state's legal code involving gambling. That being said however, Alabama is not in the listing of states who are currently trying to legalizing online poker play and gambling. With a long history of opposition to all forms of gambling activity over the years, it is unlikely that state leaders will opt in on any federal legalization of online gambling. As of now, no state leader has made a public stance for or against the measure.

Additionally, Alabama likes their laws. While the implied legal status off online gaming is nebulous and up for debate each legislative session, law makers have a penchant for outlawing certain types of betting activity, which has been legal for years, while simultaneously creating new regulated markets throughout the state.

Politics plays a role as well. Republican districts generally favor a ban on all betting activity within their jurisdictions while Democrats are frequently on the side of relaxing such strictures for their constituents. Indeed, the bulk of the dog and horse racing tracts are located inside decidedly Democratic stronghold throughout the state. While Montgomery's motivations regarding the eventuality of Alabama regulating the online poker market is in flux, currently there are no criminal statues on the Alabama books that directly targets online poker play, and currently the practice is not regulated in any way by the state.

History of Gambling in Alabama

The seeds of Alabama's gambling policies were first planted in the theocratic soil following the American Civil War. An extreme Christian backlash against immoral pursuits found purchase in that rocky soil, and the citizenry of The Heart of Dixie roundly rejected gambling as a moral Christian pursuit. Following a brief stint with a state lottery, all the rage in southern states of the era, legislators amended their 1901 constitution to prohibit virtually all forms of gambling within the state.

As an example of economics trumps ideology however, local municipalities began looking at measures to raise revenues during the depths of the Great Depression. In 1930, Phoenix City began issuing gaming licenses that quickly helped fill city coffers. By the mid-1950s, organized crime caught wind of the profits to be realized causing city leaders to close down the process to weed out criminal elements.

Fast forward another generation, 1971, the state moved to legalize wagering at dog and horse tracks. Citing the inherent skill required to successfully wager on the races, the legislature was able to circumvent the legal prohibition of games of chance.

A myriad of gaming options have sprung up in the intervening years ranging from electronic bingo halls to Indian casinos that have sparked numerous legal fights in the Alabama courts as the state continues to hone and formulate a coherent gambling policy for the state.