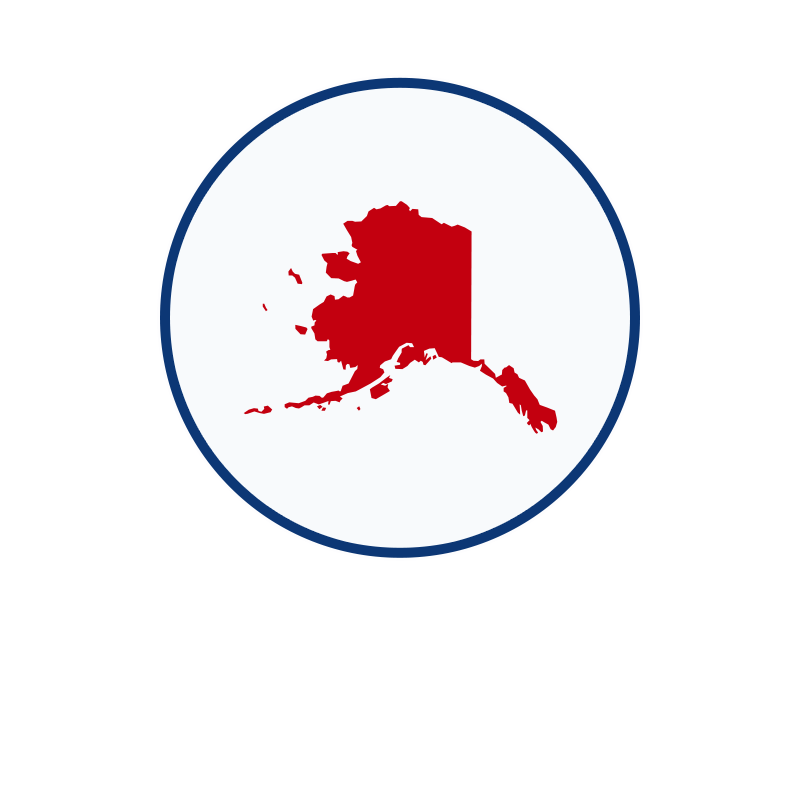 The 1867 purchase of Alaska was a gamble. Indeed, when the then Secretary of State, William Seward, negotiated the sale for slightly more than $7 million dollars, his critics in Washington D.C. dubbed the transaction, "Steward's Folly." Seward's bet paid off thirty years later however, when local prospectors discovered gold deposits in the Klondike region and the rush was on as an estimated 100,000 prospectors poured into the region over the next three years to find their fortunes.

Ranking in the top tier of Gold Strikes in the country, nevertheless the majority of these hopeful miners would be disappointed in their attempts to strike it rich. Alaskan citizens, perhaps believing that living on the frozen edges of civilization is a gamble enough, have roundly rejected legalized gaming in the Land of the Midnight Sun. A couple of factors, conservative politics and economics, play an important role in the lack of regulated gaming opportunities in the state.

With the exception of charity based betting on local dog mushing races, the state sport, and playing paper-based lottery cards, known as pull tab games, Alaska's gambling laws are extraordinarily restrictive. Owing to the limited availability of legalized gaming opportunity, the relevant section of the Alaskan criminal code is as sparsely populated as the state itself. What the state statues do spell out is a broad definition of gambling prior to declaring the entire exercise illegal.

Specifically, the state's legislators have defined "gambling" and "games of chance" as follows:

Contest of Chance—means a contest, game, gaming scheme, or gaming device in which the outcome depends in a material degree upon an element of chance, notwithstanding that the skill of the player may also be a factor in the outcome.

Gambling—means that a person risks something of value upon the outcome of a contest of chance or future contingent event not under the person's control; or influence, upon an agreement or understanding that the person or someone else will receive something of value in the event of a certain outcome; gambling does not include amusement devices that do not offer real prizes.

The inclusion of strictures against "games of skill" spells the death knell for those who advocate games of skill, such as poker and blackjack, as falling outside the restrictive measures placed against gambling.

In the back-and-forth legislative agenda of most states, a chronology of relevant court cases can be explored to determine the temperature regarding the citizenry's demand for legal gaming, but alas, Alaska's court docket is empty of such legal challenges. In fact, in a state that does not even offer a state lottery, Alaskans decided to forego legalized gaming and never looked back.

Two factors account for this decision, politics and economics. Conservative politically, the state has always been a deep red state as regards attitudes towards gaming. Typically speaking, state governments move their jurisdiction towards legal gaming in response to constituent's demands and search for revenues.

With a population just topping 700,000 denizens, none have raised a hue and cry to institute any formalized, legalized gaming within the state. Part of the reason for this renitence might stem from the generous oil subsidy check following discovery of widespread oil deposits at Prudhoe Bay and subsequent completion of the Alaskan Pipeline, which each Alaskan citizen receives each year. Additionally, owing to the huge oil royalties filling state coffers, there has been little impetus from state leaders in Juneau to search for revenues have other cash strapped states in the Lower 48.

What Are the Online Poker Laws in Alaska?

Living on the frontier, innovation is the watchword and Alaskans determined to place a bet have developed innovative ways in which to place a bet. As an example, cruise ships plying the beautiful waters along the Alaskan coastline regularly open their casinos to table games and slot games once the ships move into international waters or Canadian territory.

As a result of Alaska's archaic legal code wording, there is nothing in the state statutes that specifically bans online gambling or poker. As such, residents hankering to place a bet from the comfort of their own home widely use the internet to place sports bets, casino and online poker games. While the state's attorney general is offered up an advisory ruling whereby he posits that the state's current laws cover betting on an online format, there has never been a prosecution leveled against any Alaskan gamers. Like other states, the provision allowing for social gaming is considered legal as long as nobody involved is making a profit based on raking the pot or hosting the game.

While the high seas affords adventurous Alaskans the chance to enjoy cruise ship casino, and the internet supplies a wealth of opportunity for the state's residents to try their hand at skill based gaming, state residents can also avail themselves of the chance to legally bet under the state's charity gaming laws. From betting how many cans of salmon will fit through a port to wagering when the first Crane will arrive the following summer, the wagering instinct is met in peculiar fashions unlike any other jurisdiction.

Is it Legal to Play Poker in Alaska?

The short answer to this is probably not. At present there are no sanctioned live poker rooms within the state, nor are there any regulated online poker games in the state. In the case of the former, social gaming within one's own home is legal within the Alaskan legal code as long so long as no one profits directly from either hosting the game or raking money off of the top of the pot. As mentioned, the latter approach, online poker, is regularly played throughout the state without any efforts by the government to interfere in a prosecutorial manner. That being said however, it should be noted that the state has moved forward to explicitly outlaw cards, dice, and coin operated machines or instruments designed for the primary purpose of gambling or gaming in a fashion not approved by the Alaskan Department of Revenue.

Based on its experiences since entering the union in 1959, it is doubtful that citizens and legislators in the Land of the Midnight Sun will be moving anytime soon towards regulating online poker play in the state. As mentioned, there appears not to be the political will or desire for such a crusade, and as long as oil money royalties continue to roll into state coffers and citizens' checking accounts year after year, it is unlikely that we will see a move in that direction any time soon.

History of Gambling in Alaska

As mentioned, Alaska has not been an early, or late, adaptor for the gaming craze that has hit many of the other states in the nation over the past few years. That being said however, those gaming regulations that are in place were adopted in an almost languid fashion.

1960—the newly elected inaugural state legislature legalized gaming with oversight falling to the Department of Revenue for enforcement.