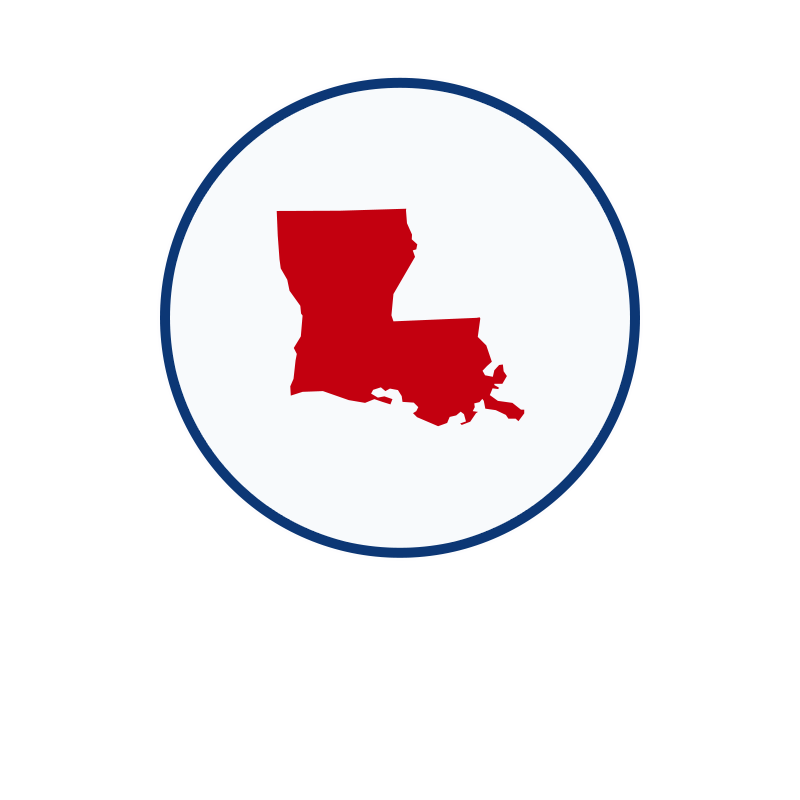 When it comes to Louisiana, most people might consider the state an open stage in terms of hedonistic pleasures, but while the weight of that assumption might be based on the single week of Mardi Gras. The reality is that millions of visitors travel to the Bayou State for its unique cultural attractions, fine cuisine, great outdoors, and exciting casino life.

The state has a rich gambling history that continues into the present, and Louisiana offers the full complement of gaming opportunities from a state sponsored lottery to pari-mutuel betting to a vibrant casino industry that pumps more than $2 billion dollars in revenues annually.

For those landing at the state's major airports or traversing its boundaries from neighboring states, the Bayou State is one of the top tier states for gaming opportunities in the country. Additionally, Louisianans can take full advantage of their unfettered access to a full range of gambling options that includes offshore casino cruises, riverboat casinos, as well as a host of card room, commercial land-based casinos, and Tribal gaming concerns.

With an array of legal gambling options, state leaders in Baton Rouge take a dim view of illegally run gambling operations, and their legal statutes, like most other state jurisdictions, aims their criminal penalties for the owners and operators of illegal games rather than going after individual players.

To better understand what is allowed and banned in Louisiana when it comes to legalized gaming options; let's explore Louisiana's legislative landscape before considering the future of online gambling options in the Pelican State.

Louisiana Gambling Laws begin with a definition of gambling that decidedly pokes a legal finger at the organizers of illegal gambling schemes or activities by noting, "the intentional conducting or directly assisting in the conducting, as a business, of any game, context, lottery, or contrivance whereby a person risks the loss of anything of value in order to realize a profit."

As far as individual players, the state only goes so far as to single them out in terms of establishing age restrictions. Specifically, under Louisiana's gambling rules, players must be 18-years of age to participate in the state lorry or horse track wagering. To avail themselves of the fun afforded at casinos or playing video poker games, players must be 21 years or older.

Note, while underage players will be cited for accessing gambling games, the charge, under the state's legal code would target them not for illegally gambling, but for gambling without reaching the age of consent.

As long as no one takes a cut or fee for their organization of a home based game, Baton Rouge legislators have carves out a safety zone in their legal codes for social gambling for charitable and recreational purposes. Additionally, under this umbrella protection, bingo games, raffle, and keno are all legal in the Bayou State.

Commercial cruise ships, operating outside the 12-mile territorial waters of the state, offer gambling cruises and casino style play that falls outside that state's legal purview, but still provides exciting gambling activity out on the high seas.

The Louisiana legal code makes dog and cock fighting illegal with stiff fines up to $2,000 and potential jail time up to three years in state prison for organizing, training, or facilitating either of these brutal sports.

The language of Louisiana's legal code addresses "computer gambling," but does little to clarify its effect on the casual online poker player. Under Section 90.3 of the state's revised statues, gambling by computer is prohibited in the Bayou State.

"Computer gambling is the conducting as a business of any game, context, lottery, or other activity whereby a person risks the loss of anything of value in order to realize a profit when accessing the Internet."

The passage further details criminal penalties of fines up to $500 and up to six months of imprisonment upon conviction.

To begin with, we can easily see that the language in this section closely mirrors the language used to describe traditional gambling venues, and secondly, again, the state directs all of its energy towards going after the operators of computer generated gambling websites rather than the players that frequent them.

Faced with the jurisdictional issues of the Internet that every state enforcement agency faces, there is simply no way to track the usage of players accessing U.S. facing offshore websites offering an array of real money poker and casino style gaming.

With little to discourage them, Louisiana residents readily access the Internet in search of host sites willing to accept their application to open an account. While it is true that there was an exodus of hosting sites from the Louisiana online gambling market, in the aftermath of the state's passage of Section 90.3, but those who left were considered weak platforms anyways and are little missed by serious players.

Is it Legal to Play Poker in Louisiana?

Under Louisiana law, if you are over the age of 21 and frequent an officially-sanctioned gaming establishment, it is perfectly legal to play poker in the state. With the exception of zoning ordinances, which serve to keep racetracks and casinos away from residential and school zones, residents and visitors can find a poker game within easy reach of their front door.

Borrowing heavily on its riverboat heritage, the state was one of the first to adopt riverboat style gambling that are licensed to offer poker to interested residents. Referring to anything floating in the water, these riverboat casinos sometimes amount to large structures situated on barges anchored near shore. Although this might not be evocative of a Mark Twain novel in the popular consciousness, it does provide a great place for Louisianans to legally play poker.

With 18 casinos dotting the landscape and nearly a dozen live card rooms in operation, gamblers have plenty of options for live poker if getting to the nearest body of water hosting a riverboat casino is a major hassle.

In fact, when it comes to video poker, players have ready access at not only casinos and racetracks, but you will also find video poker games at the nearest restaurant, gas station, convenience store, or truck stop.

Finally, owing to the social gambling laws built into the state's legal code, friends can join together for a friendly wager over a hand of poker as long as all players are on an equal playing field. In other words, as long as the game's organizer does not stand to make a profit above what they might win in the game, social poker games are perfectly legal in Louisiana.

Perhaps the biggest roadblock to Louisiana moving to regulate legal online poker play is the more than $2 billion in revenues that current gambling operations bring in today. As with any vested interest, entrenched gambling interests in the state are working to thwart an online poker expansion, and their annual revenues buy them a lot of lobbying power in Baton Rouge.

Regardless, there is little noise coming from the state capital, and there are no bills pending in either chamber of the legislature that would suggest that the state is on the precipice of joining the handful of other states that have adopted legal, regulated online poker.

Of major concern to state officials is restricting gambling access from underage players, and they fear that the Internet offers no such safety.

In fact, many in the state government have made it clear that the state is not moving in that direction, nor should anyone expect a change in the status quo. That being said however, should regulated, online poker market prove a success in New Jersey, Delaware, and Nevada, the three states currently offering the platform, Baton Rouge is unlikely to get off the fence.

All things being equal, should budget holes or educational funds come up short to fill the state's needs that might drive state lawmakers into the regulated online poker camp.

History of Gambling in Louisiana

A state rich in history, it only makes sense that a big part of that colorful history involves gambling. When French settlers moved into the area in the 1600s, they built numerous billiard halls and caberets before breaking ground on a single church. Following that church's construction, most congregants preferred to stay in the billiard halls rather than attend services, so the French territorial government sought to ban the practice. From limiting pot sizes to criminalizing play during church services to outright bans, there was nothing that could stop Louisianans, whatever their nationality, from gambling.

The trend continued during the Spanish period of ownership, following the French and Indian War, with newly minted Spanish citizens unwilling to give up their gambling ways anymore than when they lived under the French King.

When Louisiana came under the American flag in 1803, there were more gambling establishments in New Orleans than in New York, Philadelphia, Boston, and Baltimore combined. For this reason, when Americans officials banned gambling in the territory in 1812, they exempted the Big Easy from the ban owing to the pervasive grip that gambling culture held on the city.

Over the succeeding decades, Louisiana would vacillate between outright bans and open armed acceptance of expanded gambling options. Clearly, the state currently has an arms open attitude, and it is proving a win-win for the state treasury, local economies, and players looking to place a wager on their favorite game of chance or skill.