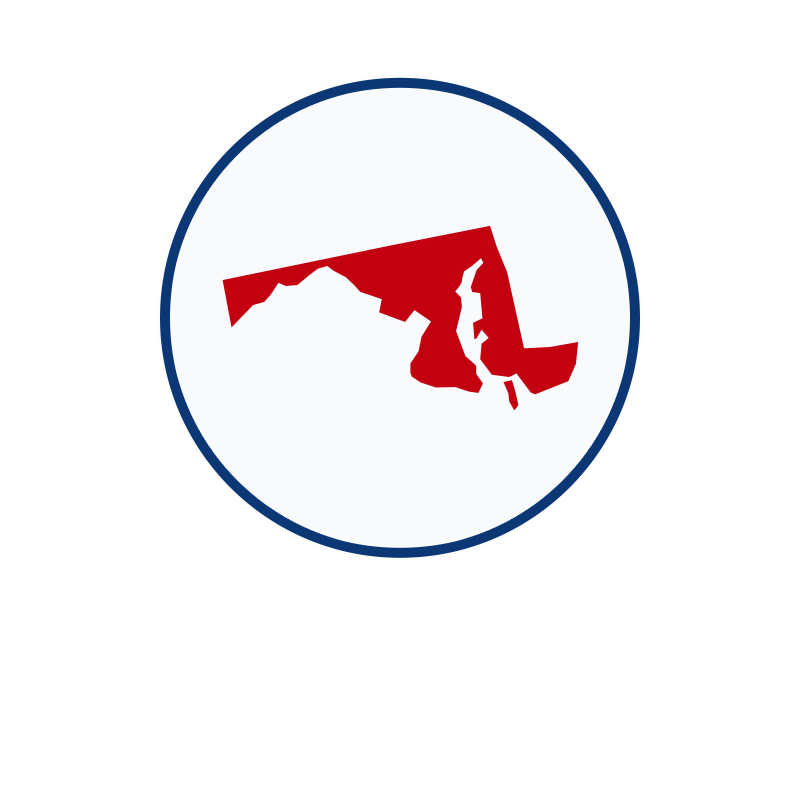 Marylanders quickly found that separation from the British Empire came with additional expenses as they found themselves scrambling to fund critical infrastructure projects in the opening years of the Old Line State's independence. To meet these financial needs, the state's legislature in Annapolis authorized numerous lotteries designed to wrest money into the state coffers. In the years since however, the state has vacillated back and forth between allowing various forms of gaming.

From charitable, licensed lotteries that proliferated throughout the 19th-century to outrights bans led by religious groups in this conservative Catholic state, today Maryland is a dichotomy of conflicting attitudes about gambling. Economic downturns during the Great Recession changed the perspective of Marylanders who soon saw the financial advantages of at least some forms of regulated gambling opportunities.

As a result, Maryland moved forward with the licensing of several land-based casinos that provide an array of gambling options for Marylanders and visitors from other states. While they opened the door on regulated gaming, legislators in The Old Line State draw a legal line in the sand against expansion to the regulation of online gambling and poker play.

Flanked as they are by two of the states that have already committed to the regulated online gaming frontier, New Jersey and Delaware, perhaps the state is looking to their performance, but for now Maryland is in the wilderness when it comes to adopting comprehensive legislation.

Let us explore the definition and particulars of Maryland's unique gaming laws before taking a look at what the future holds for the legal online poker market.

Generationally speaking, Maryland's stance on gambling had been a moving target for the better part of the last two centuries. Vacillating between outrights bans based on moral concerns to allowing access as he state's financial needs dictate, the state is currently in a more permissive cycle in its acceptance of gambling measures in their legislature and gambling houses In their neighborhoods.

As of 2017, here is a brief rundown where gamblers legally stand when gaming in Maryland:

Casino Games— Are a recent development in Maryland with passage only occurring in 2012, and the first casinos opening their doors the following year. The state's legislation authorized the building of upwards of five state regulated commercial casinos throughout their jurisdiction featuring table games and slot machines.

Sports Betting— Federal legislation, the Professional and Amateur Sports Protection Act, largely eliminated sports betting to only a few jurisdictions, and Maryland is not one of them. Currently, only pari-mutuel betting on horse races is allowed, which includes live simulcast of racing between states. Additionally, live racing action is available at Laurel Park and Pimlico Racecourse.

Lottery Betting— Maryland has hosted a state lottery since voters approved a 1973 measure to develop a Lottery Board to regulate play. As an indication of the game's popularity, sales have generated more than $13 billion in revenues to the state's treasury.

Bingo Games—are allowed for charitable fundraising purposes in Maryland, which have to be individually licensed to be considered legal. In an interesting twist from other states, this licensing requirement has been deregulated to the county level.

Live Poker— is very popular in Maryland, and players throng the poker rooms of Hannover's Maryland Live Casino, the Rocky Gap Casino Resort, Ocean Downs, Hollywood Casino in Perryville, and the Horseshoe in Baltimore. While social games are illegal under Maryland statutes, the laws are not enforced if no one stands to benefit by dint of hosting the event.

Online Casinos and Poker— Any interpretation of Maryland's laws regarding gambling in general would suggest that online gambling and poker are considered illegal under the state's legal codes. While the Internet is not mentioned specifically in the statutes, the practice certainly falls beneath the shade of the legislature's broader definition of gambling. On the up side, Maryland has always shown a sense of pragmatism regarding regulated gambling, and many believe they are taking a wait and see attitude on the question.

While there is no law addressing the legality of online gambling in Maryland, the law is pretty specific as to what it views as illegal. Towards that end, Section 12-102 simply states that a person may not "bet, wager, or gamble."

The legal statutes then proceed to list a litany of prohibited behavior. Two include the term "gaming device," which could presumably include computers or mobile devices:

Since Maryland's law criminalizes any form of gambling that is not explicitly legalized by the state, and Maryland's silence on the matter would suggest online gambling is illegal. Strong forces from the licensed commercial casinos exert an organized lobbying effort on state legislatures, for fear such clarifications might bite into their bottom line.

Regardless, and as mentioned above, Marylanders adopt a pragmatic approach to their regulation of gambling, and they are undoubtedly looking to their neighbors, New Jersey and Delaware before moving to make any substantive change to their legal stance on online gambling.

In the meantime however, actual online play chilled in Maryland in the wake of federal law enforcement in 2011, which made it that much more difficult for Maryland residents to open up accounts at participating U.S. facing websites.

In 2006, then-President George W. Bush signed into law the Unlawful Internet Gambling Enforcement Act (UIGEA) with the clear intent to curb online gambling by making it illegal for financial groups and banks to process money that derived from gambling activity. The belief behind the measure was that if you could turn the tap off the funds, players and operators would have no reason to continue gambling.

On April 15, 2011, federal officials moved forward with indictments against the biggest players in the online gambling industry with indictments handed down to the operators of PokerStars, Full Tilt Poker, and Absolute Poker.

Federal investigators found evidence implicating these companies of attempting to skirt UIGEA strictures by enlisting third-party payment processors. This legal move rocked the online gambling world and is known in poker history as "Black Friday." As it turns out for Maryland players however, Black Friday was just the first shoe to drop.

The second shoe, a second wave of indictments, known as "Blue Monday," hit the national news cycle with a decidedly Maryland slant. The government opened the second salvo in support of the UIGEA by seizing ten domain names that they identified as illegal online gambling sites, and slapped them with dual charges related to money laundering and operating an illegal gambling operation.

The indictments were the result of a two-year sting orchestrated by law enforcement officials from the Department of Homeland Security that saw the establishment of a federal-controlled payment processing center that tracked the processing of more than $33 million in gambling transactions before pouncing. Needless to say, a mass exodus of offshore poker sites makes it difficult for Maryland players to find sites that are willing to accept their application.

Is it Legal to Play Poker in Maryland?

When played at the sanctioned, commercial casinos dotting the Maryland landscape, it is perfectly legal to play poker in the Old Line State. These casinos offer an array of gaming options from three card stud to Texas Hold 'em. With hundreds of open card tables in the state's five brick-and-mortar casinos, the gambling revenues helped stem the dollars flowing from the coffers in Annapolis to those of Dover and Trenton.

Social home games became legal in Maryland as of October 2016 after both houses of the legislature unanimously passed the measure before sending it to the governor's mansion for Governor Larry Hogan's signature. Under the wording of the new law, as long as the amount of money sitting on the table amounts to no more than $1,000 amongst all the home game players at any given time, players can legally play live poker with their friends.

The answer to this question will be determined over time, and based on the performance of Maryland's neighbors, Delaware and New Jersey. Indeed, the primary impetus for Maryland opening their own commercial casinos was in direct response to watching its denizens crossing state lines and spending their dollars to fill other state treasuries. While Maryland's timeline for regulating online gambling and poker play, ruling the state out altogether would be a mistake considering the state's historically pragmatic approach to the expansion of gambling.

History of Gambling in Maryland

Dating back to before statehood, Marylanders have never been averse to throwing the dice, metaphorically speaking, when it comes to adopting pro-gambling measures when it meets their needs. The first legalized gambling in the state began in 1791in the form of "lottery grants for churches" that led to an explosion of private lotteries that numbered in thousands before the state stepped in to stop the process in 1834 when the authorities stopped issuing new licenses.

Horse racing came to the Old Line State in the 1920s, and that particular gaming entertainment is still a practiced today. The mid to late 1940s saw the growth of slot machine style play that earned portions of the state the moniker, "little Las Vegas" for a number of years until state officials pulled back from the measure. The last slot machine licensed expired in 1968 and along with it the days of the state being awash in slot machine style gambling.

The 1970s witnessed the beginning of what would become a billion dollar industry when they established the Maryland State Lottery, which they followed up with a referendum to allow commercial style casinos within the state's jurisdiction.