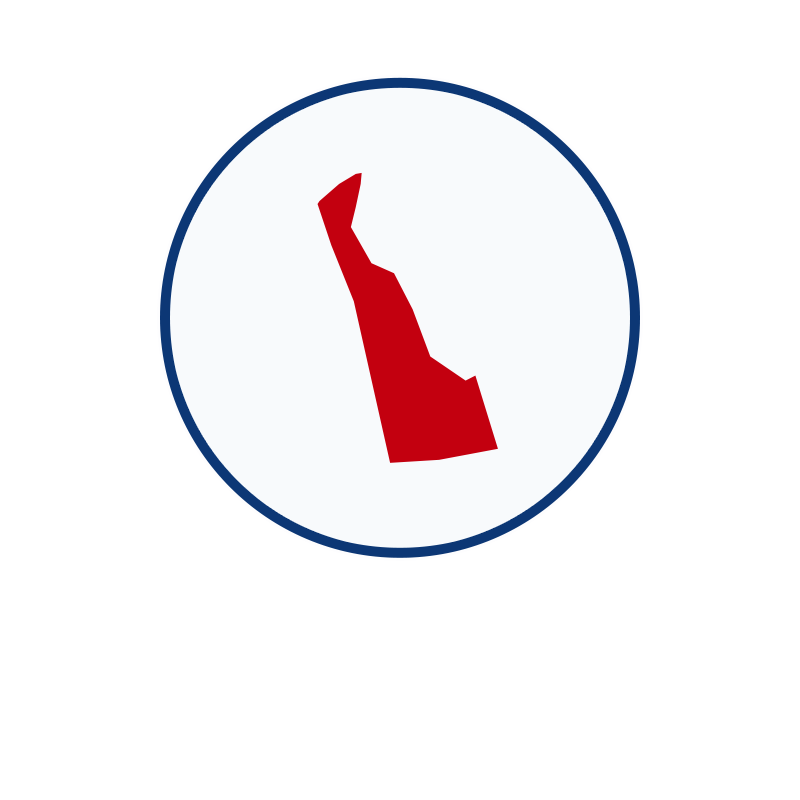 While Delaware may have earned its sobriquet, First State, owing to its prompt adoption of the United States Constitution, for fans of games of chance and skill, her moniker can easily apply to its bold step of being the first state in the nation to embrace full scale online gambling games. As such, Delawareans have unfettered access to an array of online gaming options that other states are looking at to model their own ambitious online gaming programs.

The 2012 Delaware legislation, known as the Delaware Gambling Competitive Act, authorized the state to establish the framework under which the new law would be implemented. In practice, this resulted in the licensing of the state's three existing physical casinos to develop the first phase of online gambling action in the state.

A full service operation, the casinos manage all facets of the online gaming community from poker to casino games to horse racing. An extension of the state lottery, which saw approval in the 1970s, state officials are eying the proceeds from online gaming to help fund underfunded schools and other critical infrastructure projects throughout the state.

When it comes to gambling in general, and online gaming in particular, Delaware's evolution into one of the premier betting sites in the nation is as much a testament to the popularity of online gaming activity itself as it is Delaware's perseverance in making such a big splash for such a small state in the online gaming world.

As they say, "it's not the size of the dog in the fight, but the size of the fight in the dog" that matters, and when it comes to bringing the fight towards legalized gambling, Delawareans have proven that their small population is no barrier to succeeding in the gaming regulation game. As such, the state's 935,000 inhabitants enjoy ready access to a myriad of gaming possibilities.

The progressive leadership emanating from the capitol building in Dover, the following betting options are fully legal within the state:

Casino Games—are fully accessible at any of the state's three massive casino complexes and racetracks at Delaware Park, Harrington Raceway, and Dover Downs. Not only can players avail themselves of an array of slot games, poker, table games, and all while tracking their bets on the latest horse race.

Live Poker—is available at any of the three casino complex, and real-money cash poker games and tournaments are a daily occurrence. Additionally, legal precedents, dating back to 1910, are permissive of legal home games of a social nature as long as the homeowner does not earn a profit from the game.

Online Casino Gambling—is permitted through licensing agreements struck by the big three complexes in the state. As such, your favorite slot game is just an internet connection away from paying you the fast bonus round if you can't physically make it to Dover Downs.

Sports Betting—was "grandfathered" in following federal legislation banning the practice in 1992. Delaware is only one of four states granted the exemption.

Bingo—Live bingo halls populate the communities of Delaware and have done so for some time. Supervised by the Division of Business and Professional Regulation, bingo is a popular pastime for many residents of the First State.

Lottery Play—is sanctioned under Delaware state law and comes in many shapes and sizes ranging from video lottery machines to massive potential payouts from intra-state play like the popular PowerBall games.

Online Poker—first made its appearance in Delaware, and the nation, in 2012. The licensing is owned by the three major casinos already operating in the state, and are powered by the popular 888 Gaming system. An intra-state compact signed with Nevada has significantly broadened the availability of games for Delaware residents.

Clearly, for legal gambling of just about every stripe, pretty much everything goes when it comes to Delaware and this is the reason the state has become a destination point for visitors from throughout the Middle Atlantic and New England states.

As noted, Delaware was the first state to enter the regulated online poker market, and responsibility for the legal operation and running of the games falls to the three casino complexes at Delaware Park, Harrington Raceway, and Dover Downs. In fact, these three organizations are responsible for the operation of the state's lottery games, race track betting, and casino games in a full-service operation that works as a network.

Delaware is unique and that it uses a single-provider system to power its online poker gaming. Simply stated, this means that each online poker site is run on the same software that powers the popular 888 Poker system. This allows Delaware poker players to operate off a shared pool system that includes an interstate network that allows players to access Nevada's shared pool for more gaming options. Additionally, New Jersey is in talks to adopt the same system and join the network, thus offering even more playing options for Delaware's players.

As an added bonus for players used to 888 Poker systems's layout find an instant level of comfort when they begin playing Delaware's online poker play. Under Delaware online poker rules, anyone physically within the confines of the state, over the age of 21, and in possession of a Smartphone capable of receiving text messages to confirm their location can readily set up an online account

Is it Legal to Play Poker in Delaware?

Playing poker is definitely legal under legislation passed in Dover, named the Delaware Gambling Competitive Act, and signed by then-Governor Jack Markell. Under the law's provisions, any person over the age of 21 and physically located within the borders of Delaware, either as a resident or visitor, is legally entitled to open an account with one of the three mega-casino and begin playing poker online and on gaming devices.

Additionally, live poker action is available for cash money, while the state's three mega-complexes feature tournaments as a matter of routine for interested players. Further, charitable gaming and home games where the homeowner does not make a profit on the game is likewise legally permissible under Delaware law. Thanks to the First State's permissive viewing towards gambling in general and poker play in particular, it is easy and legal for residents and visitors to place a real cash bet at a bevy of venues around the state.

As mentioned, Delaware jumped on the online poker regulation band wagon prior to any other state. Now, joined by New Jersey, Nevada, and Delaware, they are on the frontlines in fighting efforts to bar states from regulating online the poker market at the federal level. Indeed, as recently as December 2016, the House of Representatives defeated H.R. 6453, Restore America's Wire Act (RAWA), which would have resulted in a de-facto ban of online gambling and poker play. Still, for all the legislative wrangling of opponents to online gaming, Delaware's future appears as if it will continue to look bright.

History of Gambling in Delaware

Colonial Delawareans, like many of their contemporaries, were avid horseracing fans, and the historical record is replete with evidence that wagering was a concomitant occurrence at these social events. When British officials stepped in to end the practice of horse wagering, the move was purportedly motivated owing to The Crown's belief that it was not receiving its fair share of the proceeds.

Evangelicalism in the 19th-century, fueled by the Second Great Awakening, further drove gambling activity underground by the 1830's and it would be another century before any sanctioned gaming received the nod from state officials.

By 1933, the nation was firmly in its third year of the Great Depression, and budget officials in the state capital were looking for ways to fill state coffers. Pulling a page from the playbook of several depression area states, Delaware passed legislation authorizing the legalized betting on horse races. The state established the Delaware Racing Commission in that year and two years later the first licenses were awarded for on-track betting operation. Delaware Park opened its doors in 1937 to on track betting and remains one of the premiere racetracks in the nation to this day.

The state added regulated bingo play, strictly for charity purposes, in the latter half of the 1950s, and then authorized a lottery in 1981 with the further addition of video lottery machine games a decade and a half later. The lottery proved a game changer for Delaware gambling laws. Coupling relaxed social views towards gaming in general to economic anxiety in the aftermath of the Great Recession, state officials began to scramble for a way to refill depleted finances in the wake of that economic collapse.

Their solution was online poker, which was authorized in 2009, licensed and opened in 2012, and expanded in 2014 with the signing of an interstate compact between Nevada and Delaware. When the First State teamed up with the Silver State, the available pool of betters jumped dramatically for Delawareans.