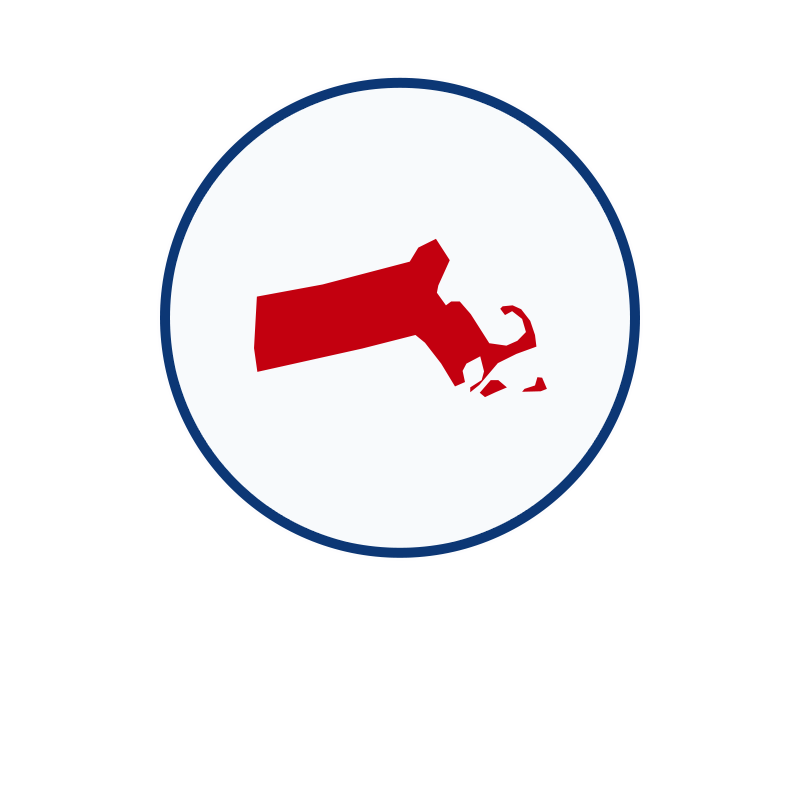 Massachusetts, the largest of the New England states, has adopted liberal policies that allow the residents of the Bay State to partake in an array of gambling activities, which over the years has received the nod of state legislator's approval from pari-mutuel wagering to land-based casinos to chances to win big in the state lottery's Mega million games. For those with their fingers on the pulse of evolving legislation regarding expanded gambling opportunities, Massachusetts is generally regarded as on the shortlist of states that will move into the column of jurisdictions swinging behind the advantages accrued by regulating the United States poker market.

Indeed, at any given time in the legislative sessions over the last several years, bills advancing the adoption of an online gambling platform within the state are wending their way through the various committees and sub-committees of the state's General Assembly and senate. While it is difficult to pin down a solid timeframe for this move, most experts believe that Massachusetts will pull the trigger on online gambling legislation within the next five years.

In the meantime, Bay State denizens have a myriad of gaming options available to them, both sanctioned and non-sanctioned, which provides ready access to a host of gaming opportunities. To better understand the state of gaming in the Bay State, let us explore the relevant legislation, while parsing through the political moves behind the scenes to divine in which direction the state will go when it comes to the wholesale regulation of online gambling.

To begin with, as Shakespeare sagely pointed out, "A rose by any other name would smell as sweet." Towards that end, the Massachusetts' revised code uses their words regarding gambling activity differently from other jurisdictions. To begin with, the state uses the word "lottery" to reference what other jurisdictions call "gambling," and they utilize he descriptive "gaming" over the more common usage of "gambling."

While one might dismiss this as a tomato versus tomato distinction, the looser lexicon used by Massachusetts is suggestive of a culture that is more amiable to viewing the practice as one of a diversion rather than a bad habit needing to be controlled.

Currently, the Massachusetts Revised Statutes define illegal gaming pretty broadly, and under Chapter 4 Section 7 of the relevant legal code, "unlawful gaming" includes every act punishable under the law relative to lotteries, the buying and selling of pools of bets, and policy lotteries. Additionally, it is illegal to gamble in a public place, as is the owning and operating of a gambling device.

The state reserves several individual charges that relate to both the participation in, and organization of illegal gaming ventures. As with most legal codes, the state reserves its harshest penalties for those organizing the games. As an example, conviction of the charge, "organizing or promoting gambling facilities or services," can earn the convicted a state prison sentence of upwards to 15-years.

With the number of regulated gaming ventures however, there is little need for Massachusetts citizens to stray too far south of the legal line to scratch that gaming itch.

Passage of the Expanded Gaming Act in 20011 opened the door for the establishment of commercial casinos in Massachusetts. Dividing the state up into three distinct regions, the law allows for the building of up to three resort-style casinos throughout the state. Additionally, the legislation further authorized the building of a single slot machine facility, which was to be determined by competitive bid.

Finally, the Indian Gaming Regulatory Act of 1988 inaugurated the opening of a Class II Indian casino with games including bingo, poker, and lottery-style pull-tabs. Class II games are frequently used and offered for charitable purposes, but native tribes are pushing to upgrade their licensing to a Class III operation. Such licensing is the true revenue generators for casinos featuring games that rival the excitement of such gambling Mecca like Atlantic City and Las Vegas. These casino games include a myriad of options including roulette, slot machines, horse racing, blackjack, baccarat, and live poker.

As with most state legal codes, Massachusetts does not directly address the question of Internet poker laws, but rather relies on the antiquated wording that mirrored the federal 1961 Interstate Wire Act. Specifically, using a telephone for gaming purposes is illegal. "Whoever uses a telephone for the purpose of accepting wagers and bets…upon the result of a trial or contest of skill, speed or endurance of man, beast, bird, or machine."

Like the goal of the federal legislation, the law's intent was to make the transmission of bets and related information a crime.

That being said however, this language does little to address the modern rise of the Internet as a gambling venue. For the "glass half full" type of gambler, the absence of any language prohibiting the activity, serves as an implicit nod to the practice, while "glass half empty" types point to the fact that no language in the law points to its legal regulation.

Such is the argument in most state jurisdictions. The solution is, so far, seems to be that of real estate professionals, "location, location, location." In short, as long as the hosting website is U.S. facing, but not on American shores, it is perfectly legal for Massachusetts citizens to access and play on them.

Is it Legal to Play Poker in Massachusetts?

My any stretch of the legal imagination, it is most certainly legal to play poker in the State of Massachusetts, but the state prefers that that occurs in a state sanctioned facility. Specifically, both tribal and commercial casinos offer players the opportunity to sit down for a hand of their favored real money poker game from three card stud to real-money Texas Hold 'em games. Indeed, some of the most prestigious poker tournaments in America are held inside the borders of Massachusetts.

Additionally, gaming operators in the state have a long history of organizing gambling cruises that do not begin play until passing past the territorial waters that Massachusetts controls. While technically originating from Bay State ports, all the gaming actions out on the high seas.

Finally, the state has carved out distinctions that allows for charitable gaming, when properly licensed, and social gaming rules that affords friends the chance to sit down at a game of poker as long as no one player holds an undue advantage owing to their organizing and hosting the game.

All indications point to yes when answering this question, but that answer does not indicate a solid timeline. Like many states, the question is hotly debated in and a frequent addition to the legislative agenda. At the moment however, the state provides no real money, online wagering platform, with the exception of pari-mutuel betting, so any effort for building a framework would need to begin from scratch.

With more than six and a half million residents calling Massachusetts home, the state's population would easily support a robust playing pool. A bill that moved through the legislative chambers a few years back, which did not see a final vote, authorized the formation of state compacts with other jurisdictions who offer regulated online poker play. Specifically, Delaware, Nevada, and New Jersey are the template Massachusetts legislators are concentrating on while crafting their own potential state regulated system.

They are also undoubtedly taking a wait and see attitude, both in regards to the performances of those four states, but also of their own land-based casinos, before they pull the trigger on legalized online poker. On that timeline, expect them to probably go in that direction within the next decade.

History of Gambling in Massachusetts

Perhaps it was its role as the cradle of Puritan culture in the New World, but the vast numbers of early residents of the state were opposed to all forms of gambling. Rather than rely on the capricious nature of lotteries to fund their early infrastructure projects, generations of Massachusetts leaders balanced their budget on the back of the shipping trade with lucrative port dues at Boston and other ports-of-call. As the 19th-century progressed, Massachusetts organizers moved to attack the lax gambling laws of other states. Again, that Puritan morality runs deep in the Bay State.

Unfortunately for those morals however, the Great Depression presented a particularly hard set of circumstances that forced a reevaluation of their moral stance. After all, the Great Depression was a global affair, and there is not much need for global shipping. As state coffers emptied, leaders in the state passed legislation authorizing horse and dog racing within the state.

It would be another four decades before the state nudged further into the business of regulating gaming with the introduction of the state lottery, which has only grown in popularity in the intervening years. A number of dates resonate with even the most historically illiterate audience, as such 1492, 1607, 1776, 1941 have common meaning amongst the audience.

For poker fans in Massachusetts however, 2015 is the banner year in common perception. That year saw the opening of the authorized slot facility, at Plainridge Park Casino, as well as the move towards opening the MGM Springfield and Wynn Everett commercial casinos.